Last year, 2012, was my first year doing triathlons. I completed an Olympic in May (Peachtree International), an Ironman in July (Lake Placid) and a 70.3 in September (Augusta). My objective at each race was straightforward as goals go: to finish and have a positive experience. Outside of triathlon, I rode my first century and ran my first road race.

As I reflect on 2012 and plan for 2013, I want to set new goals while keeping my perspectives on training and racing fresh. This season, I am going to focus on a single race at the half-Ironman distance. Since I have raced Augusta before, it’s a known quantity that I can measure myself against, and it will be my A-race for 2013. The advantage to learning what I did about myself in 2012 is that I was able to identify my strengths and weaknesses in both training and in racing.

While swimming is sometimes treated as an afterthought in triathlon racing – it is after all only about 10% of any given race – it’s where I am devoting a lot of my effort in 2013. Not only do I have the opportunity to gain time in my swim split, but I also stand to gain throughout the race because I will not have to exert myself in the water to the extent I did in the past. Keeping my heart rate low, and staying calm and controlled, will enable me to have better transitions (especially T1) and engage the bike in a different way. No complaints, by the way, that the swim in Augusta is downhill.

For the bike, since I am not racing a full, I will be able to pull back from the long distances that I needed to prepare for Lake Placid. I teach two indoor cycling classes a week and do one outdoor training ride every weekend. I’m considering complementing that with more indoor training on a CompuTrainer.

I’m finally feeling better about running. The back and leg pain that has plagued me in the past has gone away, mainly because of a slow build-up in distance to my usual training distance of 6 miles. I also do weight training to strengthen the muscles that stabilize the knees. I’m feeling good and comfortable on runs, and I plan to keep gradually increasing distance until I’m in a good place to race off the bike in Augusta.

Last season was exciting and featured some satisfying first-year accomplishments. I’m equally excited about being able to target a specific race and do what it takes over the course of a year to have a better result on a familiar course. Wish me luck, and see you in Augusta in September 2013! 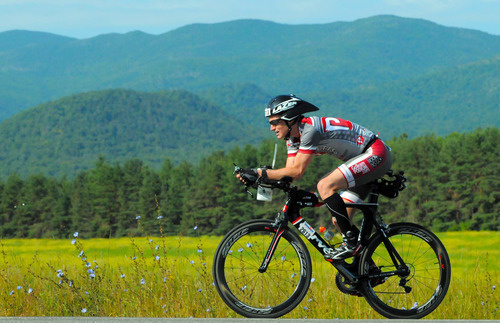