by Sean Halpin and Alison Laufer

By: Sean Halpin and Alison Laufer

Sean: Over two weeks has passed. But I still remember the man’s beaming teeth, peaking through his half-moon smile somewhere on stage at the Friday night pre-ride dinner. He wanted us to recognize the sponsors: The sponsors who were willing to associate themselves with this event. It was difficult to secure sponsors since many companies did not want their name associated with the event. That part I remember very clearly.   For those impacted by HIV/AIDS, the years are passing slowly and the advancements in science have come sometimes quickly, sometimes slowly—improving and extending the lives of those with HIV/AIDS far beyond the original death sentence that the disease was in the early 1980’s.

Alison: Friday night entailed introductions, testimonials, and a virology lesson – “This was going to be a great weekend!” I kept saying to Sean.   Cut to Saturday morning and Colin screaming at me to “GO! GO! GO!” I had been waiting in my car to act as the lead SAG (support and gear) vehicle for the over 200 mile ride.  The 200 cyclists raced past in a blur of spandex and carbon.  Oops, too slow.

Sean: Alex, Jared and I were determined to make Alison’s car “our personal SAG vehicle” for the weekend. Starting at the exit of Stone Mountain Park, we rode ahead with her for the first day, (almost) all 106 miles of it. Each rest stop along the way was outfitted in a group of increasingly excited volunteers. Along the road we were reassured by AV200 signs decorated with the sponsor names, Athens Pizza, Coca Cola…Everyone was united with the hope of raising money for a HIV/AIDS vaccine. 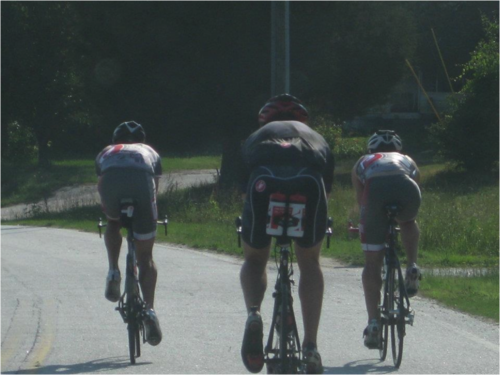 Sean: That night at the camp, the riders and volunteers gathered to reflect on the day, the money raised, and the progress made over the 10 years the AV200 has existed. One rider raised nearly $12,000 on his own. He was awarded a yellow jersey—as were the 14 other riders who raised the most money. Masses of riders raised $8000, $5,000, $585 (that’s me). Rider’s heads bobbed up and down in the crowd as the moderator asked “How many people have completed this ride 3 times, 4 times, 5 times… 10 times”.  Fervor waved through the crowd of supporters.

Alison: I was in awe the entire day and through the night.  Not only had riders pushed through over 100 miles in the Georgia heat, but also the preparation and dedication to supporting the AV200 ride which provides funding for the Emory Vaccine Center researchers.  From my years as a graduate student, I know how crucial funding is to survival in an era where money for scientific research is becoming increasingly difficult to secure.  Exhausted, we turned in early!

Sean: On the second day Jared peeled himself out of bed an hour after all the other riders had departed. We stumbled into the room where our bikes were stored. We were the first to prop our bikes against the walls of the room the day before, before it filled to capacity with over 200 bicycles. This morning we were the last to leave the room.

Alison: As Jared was snoozing soundly from his bunk, I woke before dawn with most of the riders to ensure I would be ready for the first riders out (i.e. not Sean, Alex, and Jared).  I was so excited to find out which riders I might be supporting for the day and also to see which rest stop would give the Oktoberfest-group from Day 1 some competition! 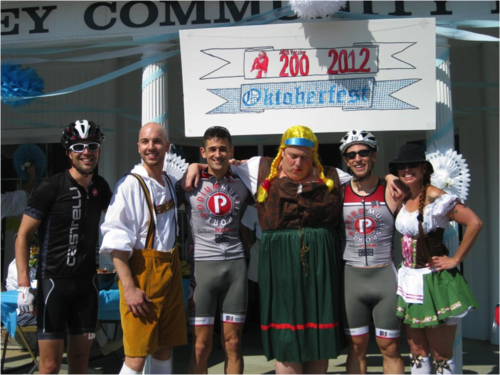 Sean: Slogging our way through the second day of 106 miles we headed back to Emory—hoping to catch Alison in the lead car somewhere far, far away. We were joined by a group of riders including AJ, who was completing his second century ever (his first century being the day before). We nearly matched our pace from Day 1 as we made our way through the aid stations and past other riders—giving special recognition to the yellow jerseys along the way.

Alison: I spent most of my day with an amazing woman who works at Emory and was booking through the Day 2 ride, solo.  Unlike the guys on Day 1 who were trying to have their own SAG vehicle, she couldn’t believe she was the lead rider and it was difficult for her to get used to me shadowing her for the better part of the day. We had a close call with a squirrel but he survived to tell the tale of a near-miss with a bicycle wheel.

Sean: We caught up with Alison at the last rest stop, just a few miles before the end—and she ferried us in, just as she had done the day previously. The riders amassed in Decatur; regrouped, we rode into Emory triumphantly, and together, just as we had left the day before.

Alison: After ensuring every single last rider had arrived safely at the Decatur meet-up, including a rider with a tire that went flat the last mile, I went ahead to witness the arrival of the riders en masse at Emory School of Medicine.   It was so heartwarming to see friends and family waiting with smiles and signs to greet the riders.  The roar of the police escort motorcycle alerted us to their arrival and the crowd went WILD!!!!

Sean: The weekend finished, as it had started with a dinner at the impressive Emory School of Medicine.  As we listened to the half-moon smile man recount the successes of AV200’s 10th year, a group of scientists were clustered together in a corner. One of them, an Emory Vaccine Center primary investigator took the mic and told us of the recent advances in HIV/AIDS vaccine research. Highlighting how our funding, a relatively small amount, helps to fuel the results which ultimately secure larger batches of funding. “In addition, and perhaps more importantly,” as he looked into the crowd, “your presence serves to remind those of us in the lab of the lives that our research aims to help”.

Sean and Alison were joined on the Podium Multisport AV200 team by Alex Solomon and Gregg Doule, and their group raised over $3000 to contribute to this years total of nearly $275,000. To learn more about the AV200, please visit www.actioncycling.org.