Race Report: My Best Race Ever

When you read the title of this entry, what comes to mind?  Usually we think of our best races as those that were our fastest or in which we beat the competition or pushed ourselves beyond our limits, but my best race ever was actually my slowest ever.  It was my best race ever because I raced the Tri The ParksBlalock Lakes Sprint on June 1, 2013, with my 13 year-old (USAT age 14) daughter, Sarah Jane in her first triathlon.

Tri The Parks races are great for newcomers, as they are small, well-organized, and have a novice division.  By racing novice, I was able to race with my daughter and make sure she was safe.

I was most worried about the 600 meter swim.  She is a good pool swimmer, but has not been swimming for several months and did no open water training.  Swimming alongside her as her own personal lifeguard made me feel better about her participating.  As it turns out, she did just fine, finishing the swim in 17 minutes and only stopping to do breast stroke pulls a few times.

Although I was there to experience the race with her, support her and keep her safe, it was important to me that we follow the rules, so it was up to her to get through T1 on her own (our bike racks were not close together).  I waited for her across the mount line for nearly 4 minutes, as she put on her socks and shoes, helmet, sunglasses and race number belt.  Once we started riding, we made sure not to ride astride or in the draft zone.

For the first half of the bike leg, Sarah Jane was smiling and enjoying the beautiful weather and scenery.  I felt pride when she would pass me and holler “on your left, Daddy!"

A little over half way, the many hills, her heavy bike, and insufficient training her young legs started to get to her.  Several times I heard her complain "my butt hurts”, “my thighs hurt”, “not another hill”.  I could relate to the feeling, as it usually hits me after 40-50 miles on the bike.

About 10 miles in, the last of the novices passed us, and Sarah Jane temporarily worried about being embarrassed by finishing last.  Before long that concern was forgotten, as some bigger hills at the end of the bike course were a challenge.

I was glad that I was racing with her, as there were long stretches on the bike where we did not see any other riders.  Total bike time was just over an hour and a half.

As we started on the run course, she said “I think I am going to start out walking and probably walk most of the way."  However, I convinced her to start running and see how she felt.  Within the next few seconds she said, "It feels good to run”, which is how I feel when I get to the run.  Even so, she still thought she would have to walk, so I suggested that we run the flat and downhill sections and power walk the uphills and the aid stations.  She agreed and executed this plan well, even running some of the smaller uphills.  Sarah Jane smiled from the start of the run until the finish (and after).  She even passed two people on the run, so she was not last after all.  Total run time about 42 minutes.  Total race time about 2 hours 37 minutes. 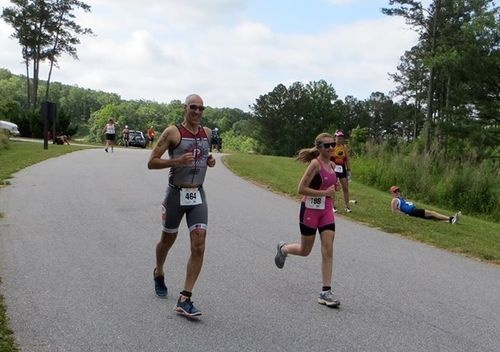 Team Podium member Dan and his daughter on the run.

We crossed the finish line together, all smiles.  Her 1st race done, and my best race ever!