I knew that I was going to have a good race in Augusta.  How could I be so sure?  Well because all of my best performances have been preceded by a terrible race week.  I’m not kidding, everything that can go wrong does.  The week before Augusta, my kids both got sick, the hospital was busy, lengthening my work days from 8 to 12 hours or more,  my old stress fracture started to flare up, I barely worked out, barely slept, and I was just plain moody.  I spent Monday through Thursday wallowing in my misery, until Friday when I realized that actually, this was all good.  I was having my pre-race disaster week, and if this was to play out the way it had in the past, it would set me up for a PR. 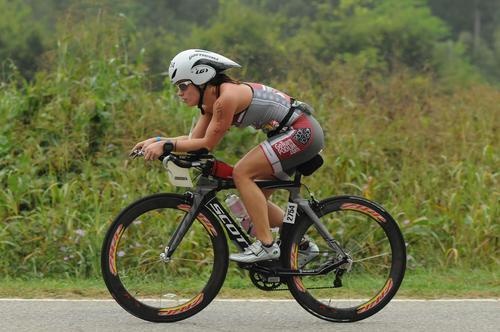 Fast forward to race morning.  For maybe the first time ever before a race, I slept great.  Dan Meyer and I managed to eat a decent breakfast, and then sherpa John Rotella was kind enough to drive us to the rowing club transition area.  This was the biggest transition zone I had ever seen.  After setting up my transition, I practiced the run in for both T1 and T2 just to be certain I had my path straight and knew where my bike was in all that madness.

I rode with my friends and triathlon couple extraordinaire, Marcus and Kelly Wiedower, to the swim start.   The female 30-34 age group was not set to start until 9:30.  Talk about waiting around for a while!  Luckily it was not a hot day, but an overcast 65-70 degrees or so.  I enjoyed some nervous chatter with Kelly Granish, as we talked strategy for her first triathlon (who picks a 70.3 for their first race?!  But she did awesome!).  Then before I knew it we were on the deck.  I just happened to catch a glance from my friend and training buddy Luke Bayer who mouthed, “Sub 5!”  The only thought I had was, “Oh yeah, in my dreams.”  I was hoping for right at the 5 hour mark.

Ask anyone who trains with me, you put me on a bike, and I am going to smile from ear to ear.  (Unless I’m having a really bad day.)  The bike portion of any race is my happy place, and I honestly love it.  Augusta was no exception.  The first 15-20 miles felt like I did absolutely no work.  The wind was in my favor, and the course was pancake flat.  I passed a girl with a 31 marked on her calf, and the next thing I knew she was sprinting to catch up and ride next to me.  “What age group are you in?” she asked.  When I told her, she mumbled some expletive and dropped back.  I smiled even bigger.  At some point after 30 miles or so, the course got a bit harder as we headed into the wind and started to do some more climbing.  I didn’t want to gas my legs out before the run, so I held back a bit.  I was humbled by the sight of military men in uniform who were cheering us on throughout the bike course.  I was touched that they would spend their Sunday encouraging us, when we should be the ones encouraging them.  I thought to myself, “I bet they’ve been through some much harder workouts than this; don’t be a pansy.”  And so my self-talk inspired by the men in uniform helped get me to T2 with a bike time of 2:37:15. 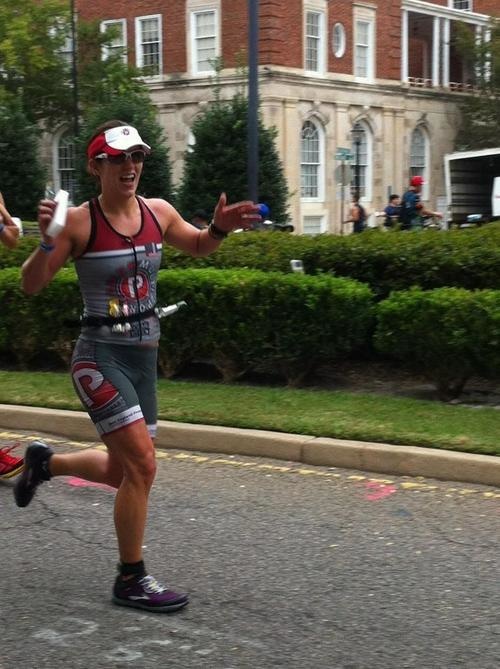 As I came out of T2 running, I probably took off a bit too fast, simply because that is what happens when I respond to the very familiar voice of Maria Thrash yelling at me!  Plus, I was excited to be on the run course because I knew my Team Podium teammates and cheering crowd would be a few miles down the road.  The run course in Augusta is flat as can be, and the humidity starts to set in by that point in the day.  The first half of the run I held a 7-7:30 pace and was feeling decent.  I was drinking at every rest stop, and taking a gel every 4 miles.  Every time I passed John Rotella, he would run alongside me encouraging me and updating me on my podium status.  This was so motivating and really helped get me through the middle miles.  However, between miles 6 and 8 my hamstring started to cramp pretty severely and I started walking water stations.  Once I passed the Podium tent on the second lap and was absolutely blasted with cheering by John, Alex, Allen, and my crazy Aunt Vicki, I regained my composure and managed to finish the run portion of the race feeling strong, (but exhausted) with a time of 1:42:14.

I was shocked when I realized my watch not only read sub-5, but 4:50:02, for a third place podium finish in the biggest 70.3 in the country!  It was an amazing day and one of those life-changing races that shows you that you are stronger and more capable than you realized.  So next time your race week isn’t going quite as well as you would hope, embrace it and prepare for a PR! 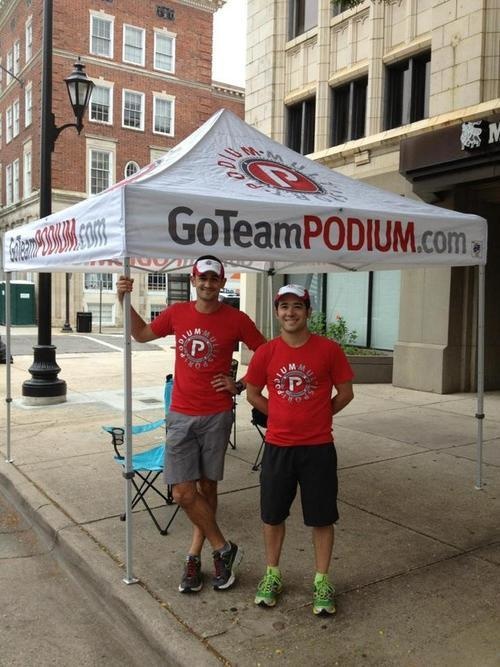 The best cheerleaders ever in the Team Podium tent!